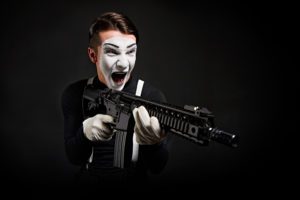 Our regular Havok Journal update with their editor Scott Faith touches on several topics that some listeners may find controversial but all will find interesting. Topics covered include;

A front on the War on Terrorism not often seen in the public; hackers modifying terrorist propaganda pages and videos to make the subjects appear foolish rather than frightening.  While mocking the enemy may be fun, Scott emphasizes that the worldwide threat from terrorism is still very real and we must remain vigilant.  “Imagine if the 9/11 attacks had been written as a movie script. It was so improbable it would have never been made into a movie. But it did happen.”

An issue that has been generating a lot of chatter among Havok Journal Authors is what they are calling the “Thank ME for my service” phenomenon.   The topic surrounds veterans who seem to celebrate and embrace the “dysfunctional/broken Veteran” image.  This has led to a cottage industry that encourages Veterans to file inflated or outright fraudulent claims for VA benefits.  As a Veteran, Scott doesn’t blame these individuals but is nonetheless very frustrated by this situation because of the extent that it takes resources from Veterans who have genuine claims and really need help.  We also discuss an egregious case of an outright multi-million dollar fraud perpetuated upon the Department of Defense education benefits program.

We also delve more deeply into one issue highlighted in the Havok Journal “Under the Radar” segment referencing the extent of Iran-Sponsored Operational terrorist activity.  These comprehensive activities around the world bear watching.

In our educational segment we highlight the interesting regulation (Army Command Policy AR 600-20) that means West Point cadets DO outrank Army non-commissioned officers.  This article generated quite a bit of controversy among Havok Journal readers.

TAKEAWAY: “I’d much rather that everyone get along but that’s not the way the world works. It’s hard to coexist with people that want to murder you and throw you in the ocean”.