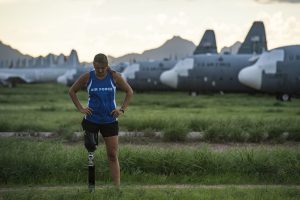 Captain Christy Wise was fulfilling her dream as an Air Force C-130 pilot when a hit and run boating accident nearly took her life and resulted in the amputation of her right leg above the knee. As a testament to her unconquered spirit, while still in the ambulance, Wise was already resolved to not let this injury end her career as a pilot.

She was inspired in part by her former Air Force Academy classmate Ryan Maguire who lost his leg in a boating accident six years earlier but returned to flying C-17 aircraft. Christy also gives much of the credit to a network of support from her family, friends and Air Force comrades. Previous amputees even contacted her and shared their experiences and gave her a sense of the steps required to get back to flying.

Amazingly, a mere 9 weeks after the boating accident, Christy was competing in the Wounded Warrior games, winning 11 medals. She has also competed in the Invictus games established by Prince Harry of the British Royal family.  The mission of the Invictus games is to use the power of sport to help wounded warriors deal with the physical, psychological and social issues associated with their injuries.

After 15 months of rehabilitation, Captain Wise was medically cleared to return to the cockpit. She became the sixth Air Force amputee to return to flying. Flying a HC-130J requires 150 pounds of force on the rudders in the case of engine failure so Christy had to prove to the Air Force that she was able to fly the aircraft safely.

Christy’s twin sister Jessica is a doctor who had been working with severely injured children in Haiti. Along with her friend who first applied the tourniquet to her leg, together they formed the One Leg Up on Life Foundation to help Haitian child amputees with prosthetic limbs.  Their first fundraising event took place at the lake where Christy was injured. To date they have provided 43 full leg and arm prosthesis.

TAKEAWAY:  “Don’t for one second long for what you were, but recklessly pursue what you can become.”