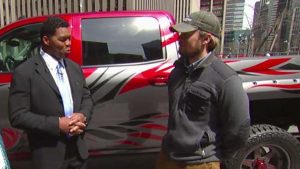 Herschel Walker is considered one of our nation’s elite athletes. Brian Jason served with one of the world’s most elite military units.  The True American Hero Truck giveaway brought them together. The giveaway was an initiative of the Rocky Ridge Truck Company to recognize and give back to first responders and members of our military.

Herschel Walker was on top of the world.  But one day the NFL great found himself in his vehicle, with a pistol, searching for a man he felt “disrespected” him.   It was then he knew he needed to seek professional help.

Diagnosed with dissociative identity disorder, Herschel wrote about his experiences in the book “Breaking Free: My Life with Dissociative Identity Disorder” and makes regular presentations about the importance of showing strength by seeking help when necessary.

Herschel has always felt that the United States is the greatest nation on earth because of the sacrifices made by our military and first responder men & women who keep us safe. This led to his involvement with the Patriot Support Program through which he travels to hundreds of military bases to share his message of emotional and motivational support. He learned that aggressiveness and violence vented on the football field had no place in everyday life and parallels his situation with what warriors may face when integrating back into civilian life.

Brian Jason also struggled making the transition to the civilian life and has lost three comrades to suicide. He encourages Veterans to check up on each other regularly.

Brian served 8 years with the Navy SEAL teams.  He completed three deployments during which he participated in over 300 missions. Brian was selected from over 5,500 nominees not only because of his exemplary service in the Navy but also because of the support he and his wife continue to give through charities like the Navy SEAL Foundation and the Travis Manion Foundation.

He ignored the first call from Rocky Ridge trucks because he thought it was a scam but says his hat is off to Rocky Ridge Trucks because every person nominated was deserving of recognition.

TAKEAWAY:  Asking for help isn’t a sign of weakness; it will only make you stronger.  If you know someone who is struggling, start the conversation by assuring them that they are NOT alone.