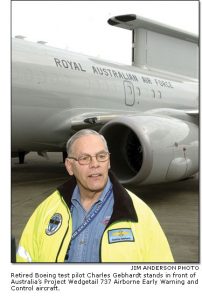 Some advice from his father led Charlie Gebhardt to a career that would have him in the cockpit of one airplane or another for more 20,000 hours.

Charlie was born in Greenwich Village about 20 minutes from Grand Central Station and close to West Point.  He planned to attend West point until his father informed there was a place just like it where one gets to fly airplanes.  That idea appealed to Charlie much more than slogging through the mud.  He was accepted to West Point and graduated in 1963 – the same class as Frederick Gregory.

Although his first flight as a cadet was in a T-33, Charlie says he chose to fly transport planes because at that time “fighter pilots didn’t get to go anywhere” and he wanted to see the world.

He completed three tours of duty in Vietnam, flying everything from the C-124 Globemaster II to 100 bombing missions over North Vietnam in the venerable B-52.

Charlie also flew the C-7 Caribou, principally on support missions for Special Forces due to its short field landing/takeoff capability.  He landed his Caribou at over 70 remote locations and recounts one instance when they made a first pass over a roadway to allow civilians to clear the road. Everyone moved to the left side of the road except one woman and her children who moved right. Just as he was coming in on final approach she decided to switch sides and Charlie had to apply full power at the last minute and go around again to avoid hitting her.

Following his military career, Charlie became a test pilot for Boeing Aircraft. One of his roles included testing civilian aircraft for military uses, including Australia’s unique “Wedgetail” early warning aircraft pictured above. As test pilots it was their job to regularly do things that would horrify a commercial airline pilot were it to happen. Sometimes the engineers would ask them to fly higher or faster than maximum altitude or speed but Charlie says they always considered everything that could go wrong before the flight.

TAKEAWAY: “I never flew a bad airplane, I enjoyed flying them all. Any problems that ever occurred were MY fault, not that of the aircraft.”