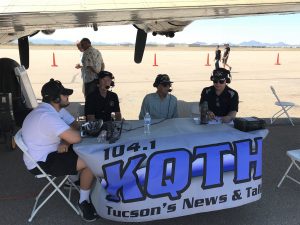 Tiffany Denlinger, half of the Denlinger Team at Nova Home Loans begins our show by sharing information about the Veterans Association of Real Estate Professionals Veteran’s Housing Summit on May 19th.  This free event will provide Active Duty & Veterans with information about the local housing market, using their VA benefits for homeownership and receiving a VA Certificate of Eligibility.

The Wings of Freedom Tour brings various World War II aircraft to communities all across America. Three aircraft were part of the Southern Arizona event; a B-17G Flying Fortress, B-24J Liberator and TF-51D Mustang.  The program allows citizens to tour through the aircraft and even the opportunity to fly in some of them.

While the Collings Foundation B-17 (“Nine-O-Nine)  came off the assembly line too late to see any action during WWII, it has been lovingly restored to a wartime configuration.  Their B-24J Liberator aircraft (“Witchcraft”) saw combat in the Pacific theatre under the British Flag and is the world’s only fully restored and flying B-24J. Their TF-51D (“Toulouse Nuts”) was a training aircraft for P-51 pilots and is the one of only three remaining original TF-51D aircraft remaining in the world.

Ninety four year old WWII Veteran Al Arreola also sits in to provide first hand experience of what B-17 crews experienced during World War II.  Al was with the 100th Bomber Group, the “Bloodieth Hundreth”. He flew 35 combat missions as a ball turret gunner over Europe including five missions over Berlin and his 21st mission was on D-Day. Even though Al was 5’10” he says he “must have moved slowly” because he was “volunteered” for the ball turret position.

TAKEAWAY:  “It’s just a shame it took a war to get people to unite.”