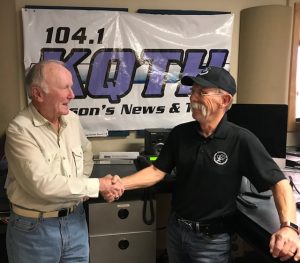 SR-71 pilot Pat Halloran grew up on a farm in Minnesota and had no interest in planes.  He studied music in college with the goal of becoming a high school band director. But when he took a break to tour with a dance band in order to earn tuition money, he became eligible for the draft.  His number came up the GI Bill seemed a better option to pay for the rest of his college education.

He intended to join the Army, but the recruiter was busy and a sharp looking man representing our nation’s “newest” branch came over and said hello.  Pat had never been in an airplane but within 20 minutes he joined the Air Force.

He deployed to Korea during the height of the war, flying ground attack missions in F-84’s.  He returned with battle damage 10 times but completed the 100 missions necessary to rotate home.  At the time, completing 100 missions took longer because his unit was short of aircraft.

Pat grew bored flying training missions following the war so he applied for a new top secret mission – the U-2 spy plane.  Pat flew U-2 aircraft out of Davis-Monthan AFB for two years. The plane he flew is now on display in their Heritage Park.

While the SR-71 was already in development while the U-2 was flying, the Gary Powers shoot down caused urgency to field the aircraft.  Pat would become one of the first pilots to fly both the U-2 and SR-71.

When Pat saw his first SR-71 he thought it resembled something from a space movie.  The plane’s capability exceeded anything they had known before, flying in excess of 2,000 mph at altitudes of 80,000 feet.   Pat shares some interesting “factoids” about the SR-71 including two stories of crews that ejected at maximum altitude and speed.

TAKEAWAY:  Because of the high temperatures exerted upon the airframe in flight and cooling when returning to “normal” altitudes, the metal of the SR-71 annealed. Engineers observed that this process caused the planes to be stronger when they were retired than when they came off the assembly line.