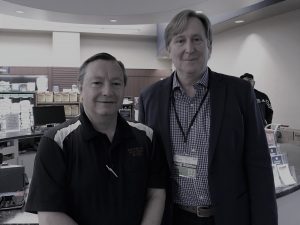 Doug Stanton probably never thought he would see his name in lights.

But that is precisely what happened when the movie “12 Strong” debuted in January. The film is based upon Doug’s second bestselling book “Horse Soldiers”.

In this episode we talk with Doug Stanton about his books “Horse Soldiers” and “The Odyssey of Echo Company”.

“Horse Soldiers”/12 Strong” recounts the role of a small cadre of US special operations soldiers that helped turn the tide against the Taliban in Afghanistan. “What was interesting about this situation was that the Americans were the insurgents.”

While Doug was reporting “Horse Soldiers”, he met a soldier on the ramp in Bagram who suggested Doug might consider writing about what he and his comrades experienced in Vietnam. The result was his book “The Odyssey of Echo Company” about Stan Parker and his fellow soldiers during the Tet Offensive. Writing this book was a real eye opener for Doug because it showed him that Vietnam is the one story that our nation has not yet put our arms around.

In addition to the coincidence of how this book came to be, the two books are tied together in other ways. One example was when a passenger insisted on giving up his first class seat to Stan when he was returning from Afghanistan. Stan first refuses the seat but the pilot announced they would not take off until Stan moved up into First Class. While walking up the aisle to the applause of fellow passengers, Stan found himself wondering if they would be treating him this way if they knew he also fought in Vietnam.

Doug shares that one of the best tools for a good author is to listen and simply acknowledge and witness the veteran’s stories. He listens for those moments when ordinary people are facing these existential crisis moments. We all face these moments.

TAKEAWAY: “What I hope people take from my books simply awareness. At least the more we know the more sensitive we can be and the better neighbors we can be.”