Peter Sherayko volunteered for the Air Force just as the Vietnam War was getting started.  He then volunteered to go to Vietnam. 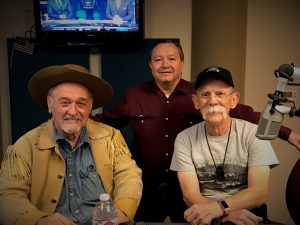 Upon returning home he continued his college education but was becoming disillusioned with his field of choice. Following a fluke conversation with a radio show, Peter decided he wanted to become a radio disc jockey. Coincidentally, the commander of the local Air National Guard squadron owned the local radio station. While in college he was cast for a play where his role involved kissing the prettiest girl in the theatre arts department.  A new career was born.

Growing up, Peter drank up every western show he could find – this kid from New Jersey became fascinated by the western genre.

Sherayko has appeared in over 150 films/television shows and 50 stage plays.  Two of his books “Tombstone; the Guns and Gear” and “The Fringe of Hollywood; The Art of Making a Western” have become THE guidebooks for western weapon collectors and film producers.

To keep working in the business he loved, and to bring more accurate representation of the old west to films, Peter founded Caravan West Productions.  Caravan West provides everything a western film production needs.  From props and wardrobe to livestock and the buckaroos to manage them and even a western film site. He also maintains an arsenal of over 1,000 historically accurate western weapons. A producer once said “If Peter doesn’t have it we don’t need it.”

Peter shares some of his most cringe worthy moments from western films (putting an empty gun back in the holster). His new book “The West; Reality of the Myth” covers Peter shares the stories of real western gunfighters that many have never heard of.  He also shares a great story from his work on Tombstone including an interaction with Val Kilmer.

TAKEAWAY:  Follow your heart and your own spirit guide. Cut your own trail. If you are right you can charge hell with a bucket of water and win.