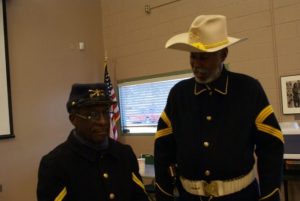 Dr. Michael Engs is an Army Veteran and amateur historian focusing upon the history of African-Americans in Arizona. During this show, Michael shares his research into the Punitive Expedition and the Buffalo Soldiers during the period 1916-1918.

Buffalo Soldiers were posted along the southwest border during Mexico’s civil war to protect against bandits and maintain the US “Neutrality Laws”.  While there were numerous incidents and even a massacre of US citizens in Mexico, it was Villa’s attack against the town of Columbus, New Mexico on March 9th, 1916 that caused President Wilson to order an expedition into Mexico to capture Villa.

General John Pershing was appointed to lead the expedition and purposely requested the 10th Cavalry Buffalo Soldiers. Pershing had led them during the Spanish-American War and respected their capabilities.

The Battle of Agua Caliente featured the first cavalry charge by US troops since 1898. The charge was led by Major Charles Young and resulted in a rout of the Villa rebels without a single US casualty.  Young was born into slavery and became the 3rd African American to graduate from West Point.  Eager to lead his troops in the First World War, the 53 year old Young rode his horse 497 miles from his home in Ohio to the War Department Washington, DC in order to prove he was still fit for combat.

The Battle of Carrizal nearly plunged the US and Mexico into all-out war when troops searching for Villa instead found themselves fighting Mexican federal troops. Negotiations that followed effectively brought an end to the Punitive Expedition.

The Buffalo Soldiers were established through an Act of Congress in 1866. In nearly 30 years of frontier service, Buffalo Soldiers took part in almost 200 major and minor engagements, including the last battle of the Indian wars in 1918.