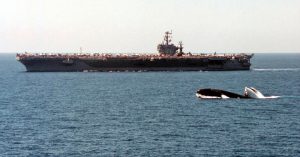 It’s called the Silent Service.  I have learned the phrase does not only apply to the stealthy nature of the mission but also to the tight knit families of the submarine community and how little the general public knows about these implements of war.

Our guest is retired Navy Captain Kevin Peppe. He served on 5 submarines, commanding one and later served as Commodore for a squadron of 8 submarines. After retiring from the Navy, Kevin was an executive with Raytheon’s Naval Warfare Systems.

Kevin shared what service onboard a submarine is like and the particularly challenging burden the Silent Service can place on the families.  Very often submariners are away with very little contact for months at a time. In a typical 18 hour submarine “day”, sailors may only have 6 hours when they aren’t on watch, performing their duty or training.

We also discuss the diverse mission set of fast attack submarines in particular; fleet protection, intelligence/reconnaissance, direct attack and Special Forces support.  An example of the kind of havoc that can be brought to bear by a single submarine came during the 1982 Falklands War, when the British expended over 203 anti-submarine weapons in a vain attempt to sink a single Argentine submarine.

While all US submarines are nuclear powered in order to facilitate their ability to deploy anywhere in the world with minimal supply support, many other countries field fleets of modern diesel powered submarines that can also pose a very real threat.  The US submarine fleet is aging and replacements like the Virginia and Columbia classes must be brought online quickly. Kevin expressed his confidence that the young persons in the Silent Service are the best trained in the world and work with some of the most advanced equipment.  He also praised the dedicated workers in private industry who are personally dedicated to assuring that our service personnel have the best tools.

Takeaway:  Kevin is confident that the Silent Service will continue to play a critical role in our nation’s defense and emphasized that