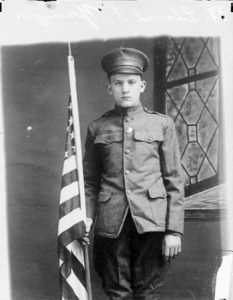 On this Day in 1921 – The bodies of four American Soldiers exhumed from four different cemeteries in France arrived at the Hotel de Ville in Paris. The four bodies selected represented the remains of soldiers for which there were no records indicating name, rank, organization or date of death.

Upon arrival at the Hotel de Ville, the official forms regarding the transfer and selection of the bodies were burned, assuring the destruction of any paper trail that would indicate where in France the remains came from.  The four caskets were draped with US flags and placed side by side in a hall of the hotel.

The next morning, at 10 AM, US and French officials entered the hall.  Among them was Army Sergeant Edward F. Younger. Younger had been twice wounded and received the Distinguished Service Cross. When Younger and five other soldiers lined up in the makeshift chapel, he thought his group was to serve as pallbearers. But then Younger was handed a spray of white roses by the officer in charge and left alone in the chapel. HE had been selected to perform a very unique task.

Younger said: “I was left alone in the chapel. There were four coffins, all unnamed and unmarked.  I walked around the coffins three times, then suddenly I stopped.  What caused me to stop, I don’t know, it was as though something had pulled me. I placed the roses on the coffin in front of me. I can still remember the awed feeling that I had, standing there alone.”

Younger faced the casket, stood at attention and saluted.  Then the other officials present, led by General  Duport, Commander of the French 6th Army Corps, all entered the hall and rendered their final salute.

The remains that Sergeant Younger selected would be transferred to a hilltop overlooking Washington DC and placed in a white marble sarcophagus inscribed with the words “Here rests in honored glory an American Soldier known but to God.”

Younger died of a heart attack on August 6, 1942 – almost 8 months to the day after the US entered into World War II.  He is buried in Section 18 of Arlington Cemetery next to his wife Agnes and approximately 300 yards from the soldier he selected to be forever interred in the Tomb of the Unknown Soldier.