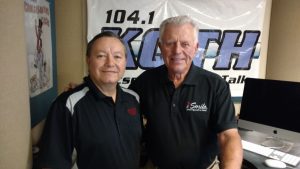 Dr. Gary McLeod is a Vietnam Veteran and dentist that provides free emergency dental services to any veteran in need.

Gary’s father and two uncles all served in the military during World War II.  One uncle was a Navy Corpsman who was captured on Guam spent three years as a POW. In accordance with his family tradition of military service, Gary enlisted in the Air Force early in the Vietnam period.  During the Vietnam War, he supported Air Force operations out of Okinawa.

Dr. McLeod feels the system that provides healthcare for Veterans is overloaded and needs private sector support.  So his five dental franchises in Arizona and nine in Utah provide free immediate and emergency dental services for veterans in need. Another of his nationwide companies provides service to Veterans as well.  He considers this a private practice extension of his military commitment to serve.

The role of military healthcare providers is mission critical. During our conversation we discussed the history of dental service in the military, from Paul Revere conducting the first recorded case of military forensic identification to the incredible story of Dr. Ben Salomon, one of only three dental officers to receive the Medal of Honor.

Gary shared a personal recollection that still gives him goosebumps. While in Okinawa, Gary performed some extensive dentistry on a photo reconnaissance pilot.  The pilot said “Doc, if I have to eject from my airplane and this thing comes out, I am going to come back and haunt you.”  One month later, the pilot poked his head into Dr. McLeod’s office and shared that he had indeed been shot down and had to eject over the ocean. But when he hit the water, his partial stayed in.

TAKEAWAY: Gary extends the code of conduct he learned in the military as a dentist in private practice. “We are dentists by profession but we are health providers and life savers by calling.”