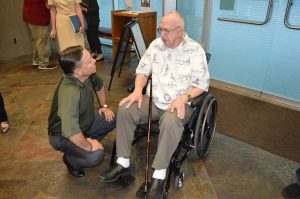 Twenty one year old Fire Controlman 3rd Class Lauren Bruner scrambled to his duty station 87 feet above the deck of the USS Arizona when the attack on Pearl Harbor began.   10 minutes later Japanese bombs fatally crippled the Arizona, trapping Bruner and his shipmates in an inferno.

The repair ship Vestal was moored nearby and threw over a line. Bruner and six other men climbed hand over hand across the rope.  Bruner was the second to the last man to leave the USS Arizona and had burns over 70 percent of his body.

After 7 months in the hospital, Bruner went right back at it as a crewmember of the new destroyer USS Coghlan.

Now a sharp 95 years old, he has already made arrangements to have his ashes buried along with his shipmates on the USS Arizona when he is finally bid “Fair Winds and Following Seas”. 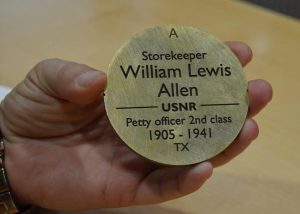 A new memorial representing a full scale outline of the 608 foot long battleship is being built in the center of the University of Arizona campus mall. Brass medallions inscribed with the name and rank of every one of the 1,177 sailors and marines killed aboard the USS Arizona on December 7, 1941 will be installed around the perimeter of the memorial. It will be the largest memorial to the Arizona apart from the National Park in Pearl Harbor.
If you would like to support this cause please visit the donation site.