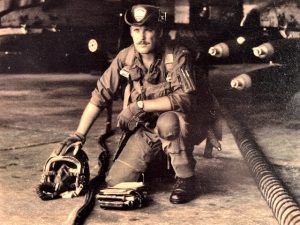 Wade wanted to fly and decided to enlist rather than wait to be drafted. He earned his commission in 1968 and was assigned navigator wings.  He flew in Vietnam as a “back seater” in an F-4 Phantom completing 427 ½ combat missions.

Wade participated in both Operation Linebacker and Operation Linebacker 2 – the largest heavy bomber strikes launched by the Air Force since World War II. Bombers attacked logistical targets such as transportation infrastructure, marshalling yards and other targets designed to reduce the ability of the North Vietnamese to fight. Both campaigns achieved their objective of getting the North Vietnamese back the negotiation table but at a high cost; 92 B-52 crew members were lost. During the Linebacker campaigns Wade flew missions to protect the bombers from air threats and also provide ground attack.

The Vietnam Peace Accords were signed on January 27, 1972. But the war was not over for Wade Hubbard. President Nixon continued what some called a “personal” war. Six days before he was scheduled to return home, Wade and his pilot were shot down over Cambodia. He ejected at 20,000 feet which tore off his helmet and oxygen mask, broke his shoulder and caused him to pass out until he reached an altitude where he could breathe again.

TAKEAWAY: Wade will always be grateful to the crews that rescued him because the Khmer Rouge did not take prisoners and would have probably shot him on the spot.