“The Shot: The Harrowing Journey of a Marine in the War on Terror” tells the story of Sgt. Bill Bee’s narrow brush with death and the challenges he faced post- service. It is co-authored by Sgt. Bee and Daily Mail editor Wills Robinson.

Bill was deployed with his unit in the Helmand Province of Afghanistan when Goran Tomsevic, a Serbian embedded reporter from Reuters joined them.  Bill did not have much respect for “embeds” after his first reporter requested to be evacuated after only one day in the field. Goran was different. Bill says Goran had an “operator mentality” and just a touch of insanity. 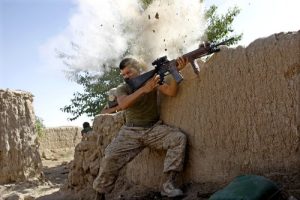 Bill’s unit had been notified there might be a Taliban marksman in the area and a single shot alerted Bill to his presence. Without donning his armor and helmet Bill rushed to check on his men. He had just drawn a bead on where he thought the sniper was positioned when his entire world went dark.  Goran was positioned nearby and mistakenly captured The Shot – a series of photos that showed the instant Bill Bee narrowly avoided death. Goran would later tell him “This picture only happen one time before and that guy died.”

An IED in Marjah would wound half of Bill’s squad kill two Marines. A third traumatic brain injury would end his career with the Marines and began a nightmarish experience with the VA.  He had trouble scheduling treatment and they had him on a cocktail of 18 pills. Bill attempted to take his own life.

Wills Robinson was shown photos of The Shot and asked to follow up on Bill’s story. Bill had declined previous interview requests but he saw this as an opportunity to help other Veterans. The day after Robinson’s story appeared in the Daily Mail, Bill was contacted by the VA. “It shouldn’t take a news article for someone to get help with something they rated in the first place.”

TAKEAWAY:  “You can’t do this by yourself. There is help available but you’ve got to break down and ask for it.”