Cobra gunship pilot Lew Jennings flew 726 missions in Vietnam, receiving over 50 combat decorations including three Distinguished Flying Cross citations for Valor and 36 Air Medals.  He published a memoir about helicopter combat in Vietnam named “19 Minutes to Live”. He joins us as part of our partnership with the Distinguished Flying Cross Society. 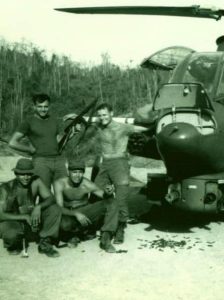 Lew shares some of the tactics they developed “on the fly” depending on the terrain and mission. Many of his missions involved hunter-killer teams consisting of OH-6 scout helicopters, Cobras and Hueys. Sometimes they would fly in “pink teams” consisting of only a scout helicopter and a Cobra gunship. “It was our job to go out and stir things up.”

Lew describes some of the more heroic and tragic missions of his time in combat. These included one pilot who climbed out of the cockpit while airborne to kick lose a misfired rocket. One of my favorites was a mission with Eddy “Mad Bomber” Joiner.  In order to deal with a bridge way deep in a ravine, Eddy filled a five gallon can with napalm and attached a phosphorous grenade. His co-pilot carried the homemade bomb on his lap, pulled the pin and barely got the contraption out of the helicopter before it exploded. They destroyed the bridge and were awarded the Distinguished Flying Cross for that mission.

His unit was heavily engaged in the A Shau Valley action that came to be known as “Hamburger Hill”.

Lew and several other “grey hairs” came out of retirement to fly hundreds of classified missions in Iraq. Lew was 62 years old at the time and their chief pilot was 72.

TAKEAWAY:  Lew says he spent many nights trying to figure out how to best support the guys “with a rifle and rucksack” on the ground.