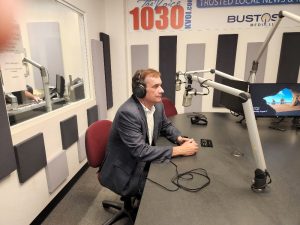 Irv Brandt’s evolution from a Navy torpedo man to law enforcement was an awkward transition but it worked out. Irv served with the US Marshal  Service for more than 20 years. After leaving the Navy, he went to college to study business. After Black Monday no one was hiring business majors, but there were lots of opportunities in Law Enforcement. “I went into law enforcement and it turns out I was really good at it.”

As a member of the Atlanta Police Department, Irv was assigned to Centennial Park during the Olympics. He was fifty feet away from the bomb detonated in the park by Eric Rudolph. “I’ve been shot at, I’ve been stabbed, but nothing is more terrifying than a bomb. It’s amazing to me that I wasn’t hit”.

Irv tested for a position with all the Federal Agencies and was waiting for a DEA academy class when the Marshal Service called. The Marshal’s academy began earlier so Irv jumped at the chance.

We discuss one of Irv’s cases that was featured on America’s Most Wanted; Jodie Thompson. Thompson escaped from prison and was on the run for more than three months. Victims said Thompson could open a gambling machine quicker with a crowbar than staff could with keys. “He was one of the coolest persons under pressure I have ever seen. I had him at gunpoint and he smiled at me.”

Irv spent much of his career working international cases. The US Marshals conduct ALL international extraditions for local to federal agencies. He used to charter jets and bring home cartel members a dozen at a time. Irv says the most satisfying arrests were sex offenders because they will keep offending and leave a wake of misery if they are not caught.

Since retiring, Irv has become the author of the Jack Solo thriller series.

TAKEAWAY: “Once a warrant is issued, the US Marshal service WILL CONTINUE looking for you until you are arrested or dead.”