“Shot Down” – The Story of the Susan Ruth

“Shot Down” – The Story of the Susan Ruth 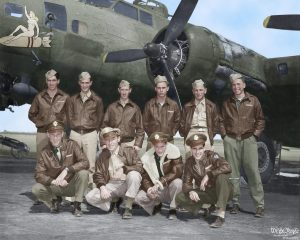 “Shot Down” tells the story of the crew of the “Susan Ruth”, a WWII B-17 shot down on Feb. 8, 1944 over the French/Belgium Border. The name was given to the aircraft by Pilot Howard Snyder in honor of his young daughter.

Steve Snyder, Howard’s son, has written a meticulously researched and detailed book that describes the lives of the crew members and their harrowing months in hiding from German forces. The book also tells the stories of the brave Belgian citizens who risked all to keep the American crew members safe.

Steve had a great deal of material to work with in putting together Shot Down. He had diaries and correspondence from the crew members as well as interviews with his father Howard before he died. There were also some surprises. He was able to get in contact with the German aviator who was one of the pilots that shot down his father’s plane. (Both German fighters were also shot down by the B-17 in that action.) A random Facebook message also put him in touch with the granddaughter of one of the Belgian rescuers.

Howard Snyder eventually got tired of hiding all the time and not being able to make the arduous escape journey through Spain. Because he had some infantry training before going to pilot school he decided to join The Maquis – a resistance fighter group. This was very unusual in the history of WWII.

Of the 10 member crew of the Susan Ruth, only five were eventually able to return home. Two crewmembers were killed in the attack and three were captured and executed by the Germans – a war crime. Many of the other five families only knew that their loved ones were missing in action until they received telegrams that they were safe.

TAKEAWAY: It was particularly impactful to talk with Steve while sitting a mere 20 feet away from the B-17 “I’ll Be Around” on display at the 390th Memorial Museum in Tucson, AZ.