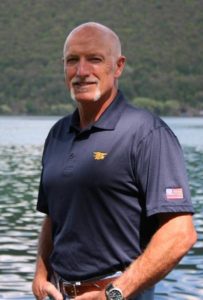 “Walking In Mud: A Navy SEAL’s 10 Rules for Surviving the New Normal” was inspired by Steve Giblin’s observations of what is happening with his fellow citizens during the pandemic.

Steve served 28 years as a Navy SEAL and another nine as a civilian contractor. Much of his career was spent with the Tier One Navy Special Warfare Development Group.  While cleaning out his new office, he came across a single page typewritten document titled “The Ten Essential Qualities of an Underwater Demolitions Man.” The document was written by Lt. CDR F.R. Kaine, one of the original World War II “Frogmen”, as a list of basic things he expected from those under his command.  These ten qualities (Pride, Loyalty, Sincerity, Responsibility, Leadership, Example, Forethought, Fairness, Seamanship & Common Sense) form the structure for the chapters in “Walking in Mud”.

Steve initially met “Walking in Mud” co-author Jon Land through the Home Base Veteran and Family Care organization. Jon was looking to interview Veterans for a book he was writing.  After he and Steve corresponded they decided to write a book of their own.

We explore how these ten qualities translate into simple rules for living life in general and dealing with the stresses of our “new normal” in particular. One great example of resiliency is the story of “Michelle”, a sailor who was reassigned from supply duties and received a “crash course” in Special Forces training in order to join a cell assembled for Operation Just Cause. When the operation was complete the Navy sent her back to supply but instead she “crossed the street” and joined Army special operations.

TAKEAWAY: One of the famous aspects of Basic Underwater Demolition/SEAL training is the brass bell that candidates can ring three times to “volunteer out”.  Many of us face a similar metaphorical brass bell in our lives.  Steve shares that one cannot “un-ring” the brass bell at BUDS but we can often can go back on quitting decisions we have made in our lives.