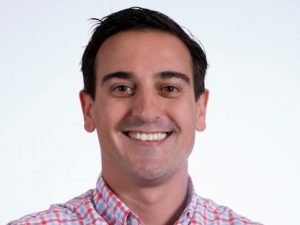 a leadership crucible moment unlike many entrepreneurs. At the age of 23 he found himself responsible for a $2 Billion submarine and the lives of 180 sailors.  One might say it was the perfect preparation for someone who would go on to the rough and tumble world of Silicon Valley technology.

Jason followed his brother to the US Naval Academy and was still a midshipman when the 9/11 attacks occurred. Nassiri says the “nature of my proximity to war changed at that point.”  He volunteered for submarines and served on the USS Alaska (SSBN 732) and the USS Chicago (SSN 721). One of the leadership lessons he learned aboard submarines was “You’ve got the team you’ve got and you have to make it work and make due with the resources you’ve got.”

While his degree from the Naval Academy was in Electrical Engineering, he found himself more intrigued with management and enrolled at the prestigious Stanford Business School.  Nassiri says that while the MBA experience helped him “decompress” from the military, the transition to the civilian world was still not an easy one.  Based upon his experience and transition stories he heard from other Veterans, he started the “Beyond the Uniform” podcast.  He has interviewed over 415 Veterans about their transition stories.

While completing his MBA degree he regularly met with other students to discuss problems that needed to be solved and how they might be addressed. This planted the seed for the company that would become “StoryBox”.  Jason pursued the venture capitalist route to fund his first endeavor, an exercise he described as “tap-dancing to feed my baby.” His client base grew to include giants like Disney, Levis & Bud Light before he sold the company. His latest venture is a marketing technology company named “Captivate.”

What he found hardest about Silicon Valley was the psychological component. “You are working hard night and day and then the person in the office next door to you becomes – literally – a billion dollar company.”