The Battle of Fallujah tested Dr. Donnelly Wilkes in many ways. It refined his medical skills AND his faith. He tells his story in the autobiography 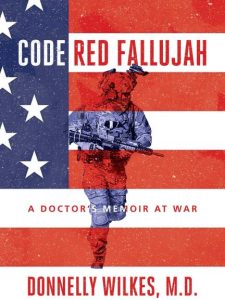 Wilkes had accepted a Navy scholarship and was in his fourth year of medical school when the September 11th attacks occurred. At that moment he realized his career as a Navy doctor was likely to take a different turn. He chose to embed with the Marines in order to stay closer to his wife.

Responsible for the health of 1,000 Marines, it was he job to go where they go.  In 2004 this would mean setting up a field aid station in support of the First Battle of Fallujah, one of the most violent events of the Iraq War.

Field medicine is vastly different from hospital medicine. While major innovations have occurred in combat medicine, most apply at the “secondary” level of treatment, not the front line areas where Dr. Wilkes was operating. He says in many ways those techniques are not much changed from previous wars.

Dr. Wilkes and his corpsmen also had to deal with the added pressure of regular mortar and rocket attacks. “Indirect fire may not wound you directly but the mental torment is intense.” He describes his first combat casualty, an event that was recorded in a Pulitzer Prize winning photograph.

We also discuss the juxtaposition of being a “Warrior-Healer”. “All your training up until you go to combat is to do no harm. And then you are put into an environment where you are trained to use your weapon.”

Dr. Wilkes shares how combat transformed his faith and lessons he learned and can be applied to anyone’s life; get your heart and mind balanced, get your body fit, grab a fistful of courage and go after it.”

TAKEAWAY: “You are the most important person you will ever meet. DON’T be late to that meeting.”