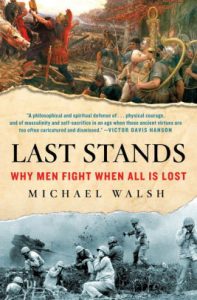 “Last Stands; Why Men Fight When All is Lost” is the latest book by Michael Walsh. The book examines several legendary battles from the Spartans at Thermopylae to the Battle of Chosin Reservoir. Michael has authored 16 works of fiction and non-fiction and his books have been translated into more than twenty languages.

Michael had just completed two books examining classic western civilization and the next logical step was looking at the men who fought to preserve western culture. In particular, Michael says the book is homage to his father & his comrades, a Marine who fought in Korea & Vietnam.

Michael purposely did not write a military history book that strictly focuses on the tactical and operational level but rather one that examines recurring themes in all these battles and their broader cultural context . We agree that “You can’t beat up history with the lens of today.” His chapter on The Alamo provides a perfect example.

Last Stands is meticulously researched and full of surprises like the fact that General George Custer had plans to run for President and achieving a big win in the Indian Wars would have added to his stock. Michael calls the Battle of Little Big Horn perhaps the “worst campaign event ever.”

Michael chose the battles based upon a common thread; last stands where the losing side winds up winning – their sacrifice was not wasted. Michael’s analysis of the Battle of Shiloh emblemizes this concept for both General Grant and the Union Army.

We briefly discuss the idea of whether we as a society still fight wars with the goal of complete victory. Michael believes the real question is “When was the last time we fought a war to win it?” That responsibility falls upon the civilian leadership, not our military.

TAKEAWAY: “While technology may change, human nature is immutable”