Col. Michael Drowley has flown a wide assortment of aircraft over his career. Heavy bombers like the B-1 & B-52, the C-130 and C-17 heavy transport planes, F-15 & F-16 fighter jets, the B-2 Stealth bomber and even helicopters. But the slow and tough A-10 Thunderbolt is his favorite. 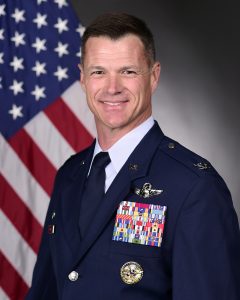 He is careful to make a distinction between fighter pilots and attack pilots. The A-10 was designed and built with one singular purchase – to support troops on the ground. “Everything we do as an A-10 pilot is about supporting those Soldiers, Marines and Special Forces personnel on the ground. The more I can put myself in their shoes, the better I can understand how I can help them.”

Drowley says there are three words that can stop an attack pilot’s heartbeat; “Troops in Combat”. He first heard those words crackling across his radio while supporting a special operations team attempting to extract a high value target in Afghanistan. He shares details of that extraordinary mission and another mission in Iraq where he had to make the difficult decision to terminate a rescue mission rather than risk losing more lives.

Drowley cited these two missions as examples of the fact that sometimes there can be “..fates worse than death” in a TedX talk to airmen at Scott Air Force Base. While at first reluctant, with some encouragement his became the first Ted Talk delivered by an active duty member of the military.

At the time of this interview, Col. Drowley is the Commander of the 355th Wing at Davis-Monthan Air Force Base but he will receive a promotion to Brigadier General and take command of the 57th Wing at Nellis Air Force Base in July.

TAKEAWAY: “I would rather take trust over technical competency any time. If I know I can trust someone with my life and know they aren’t going to run from that responsibility, to me that is the difference maker between an average team and a high performing team.”