“Pale Horse: Hunting Terrorists and Commanding Heroes With the 101st Airborne” is one of three books authored by Colonel Jimmy Blackmon. Pale Horse tells the true story of an Army aviation task force in Afghanistan during a period when “we fought every day of the year”. 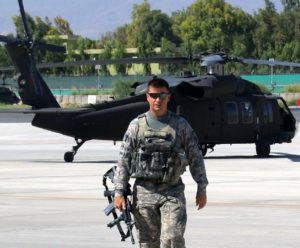 While he has flown high risk missions all over the globe, Jimmy’s introduction to the Army was not quite so glamorous. With working at the local cotton mill his only prospect after High School, he responded eagerly when “..an Army recruiter came knocking on our raggedy screen door.” The recruiter knew he had Jimmy hooked so he put him in an operational specialty he could NOT sell. In his Advanced Individual Training, Jimmy sat at a typewriter for 13 weeks, 8 hours a day and typed.

Jimmy and his team were on a reconnaissance mission over Iraq on July 22, 2003 when he heard an urgent call for air support. He and his Kiowas arrived over a barricaded house in a crowded Mosul neighborhood. Uday and Qusay Hussein were inside. In his book “Cowboys Over Iraq” Jimmy shares all the things that went wrong on that mission and lessons learned. We also discuss how Iraq caused the US to modify our fighting doctrine.

Jimmy commanded Task Force Pale Horse – the 159th Combat Aviation Brigade in Afghanistan during a period when no less than 5 Medals of Honor were awarded. Afghanistan was a different animal than Iraq. Weather and terrain controlled everything and the Afghan fighters were much more disciplined. While in Afghanistan he received “probably the worst order in 30 years of service” when told the 159th Combat Aviation Brigade would be deactivated.

TAKEAWAY: “The battles remain but the faces of the soldiers will fade.” Jimmy has been compelled to write his books because it is important that these soldiers’ stories are told by someone who was there with them.