Martha LaGuardia-Kotite has firsthand experience with the old sailor’s superstition that women aboard ships are bad luck. When she an another officer were the first women assigned to serve on a particular Coast Guard cutter in 1989 (along an otherwise all male crew), some of the crew grumbled about bad luck. However, the Coast Guard has in many ways been on the cutting edge of innovative changes and Martha chose to apply to their academy specifically because there were no gender restrictions; ALL roles in the Coast Guard were open to both men & women. 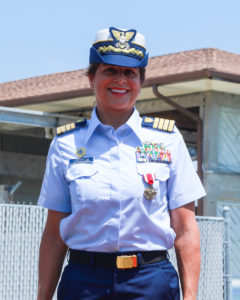 During her 29 years of service, Martha served aboard two ships. She also deployed on scene for various significant events like the Deepwater Horizon Oil Spill and hurricanes Sandy and Maria. Martha retired at the rank of Captain.

Martha holds a master’s degree from Harvard University and is the award winning author of five books. We have a more in-depth discussion about two of those books. “So Others May Live” tells the untold stories of heroic Coast Guard rescue swimmers. She describes one particular rescue performed by Petty Officer Tristan Heaton during which the helicopter pilot actually flew INTO a cave to complete the mission.

In “Changing the Rules of Engagement” Martha shares the profiles of 17 courageous women who shattered the glass ceiling and performed extraordinary feats while serving their country.  The story of each woman offers lessons that cross over into the civilian and business world.

While the US Coast Guard IS a branch of service, they fall under the Department of Homeland Security rather than the Department of Defense.  On an average day, the Coast Guard will conduct 109 search and rescue cases, save 10 lives, protect nearly $ 3 million in property and seize 306 pounds of cocaine. It has been involved in every war that the US has fought.