“Manhunters: How We Took Down Pablo Escobar” is written by former DEA Agents Steve Murphy and Javier Pena. Steve Murphy joins us to share details. 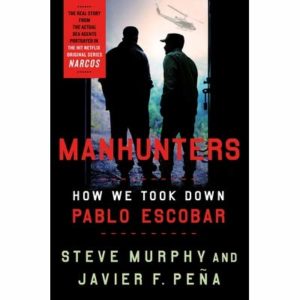 Murphy and Pena first appeared on the world’s radar when their story was dramatized in the Netflix series “Narcos”. Steve and Javier do about 75 speaking engagements a year and wrote the book because they wanted the world to know the truth beyond what they may have seen in film or on television.

At the height of his power, Escobar was smuggling 80 tons of cocaine per month into the US. Steve outlines the beginning of the “King of Cocaine’s” criminal career and emphasizes the fact that the man had no conscious and was absolutely NOT the “Robin Hood” character depicted in many films.

The facts of Escobar’s story are truly stranger than fiction and Manhunters reveals many details about his eventual downfall. We also discuss some of the other interesting characters in the story including “Los Pepes”, the CIA/Delta Force and FARC. (SEALS and Delta Force lived with Steve in Medellin for six months.) He also discusses the less than cordial relationship they had with the CIA chief of station.

Despite the fact that Steve was basically going into a combat zone, his wife Connie chose to join him. One of the details that the Narcos series did not portray accurately was the fact that Connie never left the country and she and Steve ended up adopting two Columbian children.

Though a $300,000 bounty was placed on his head, Steve believes the legacy of murdered DEA agent Kiki Camarena went a long way toward keeping him safe.

Manhunters is a fascinating read and if ordered through their website, Steve & Javier will autograph and personalize the book.

TAKEAWAY: Steve says that even though people call him and Javier heroes, the REAL heroes are the members of the Columbian Police and military who took their country back.