Leavenworth is a military correctional facility located on Fort Leavenworth, Kansas. It is the U.S. military’s only maximum security prison that houses male service members.  It is also the title of a compelling new documentary series from Oscar-winning director Steven Soderbergh broadcast on the Starz network. 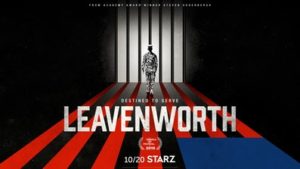 Two of the series’ Executive Producers, Emmy Award winning Paul Pawloski and David Check join us to share their perspectives on the case. The documentary Leavenworth examines the case of former Army Lieutenant Clint Lorance, serving 19 years on two counts of murder for ordering his men to fire upon three men on a motorcycle in Afghanistan.  The series does an excellent job of examining the delicate balance between guilt and innocence in the circumstance of war as well as the other factors involved in his eventual charges and conviction.

Neither Paul nor David served in the military but they retained a Veteran on the project staff because they felt it was essential that the story be told correctly.  Paul states he was attracted to the project because it is an amazing story at its heart; a moment in combat that has created a butterfly effect impacting so many persons.

Both men emphasize that the series is by no means meant to definitive, no film could be. However, by bringing this story to a broader audience they hope viewers will reach their own conclusions.

Editing staff had some rather robust debates of what should be included and what shouldn’t. But they all agreed on the overarching responsibility to capture a myriad of perspectives in order to present a balanced story.

TAKEAWAY:  “From our experiences in sports, we are accustomed to telling stories where there are winners and losers.  This story is far more nuanced, far more complicated. There are casualties all around, both metaphorical and literal.”