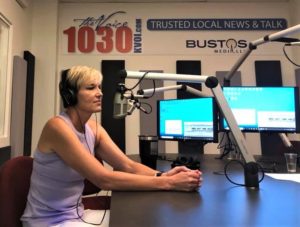 National Police Week is recognized every year in May to pay tribute to the Law Enforcement men and women who protect our families and communities. There are approximately 900,000 Law Enforcement Officers in the US and 37 have been killed in the line of duty so far this year.

Sherry’s husband Tim Graham was a Sheriff’s Deputy killed in the line of duty August 10, 2005. She shares what she went through as a surviving spouse and the types of support that Concerns of Police Survivors provides for spouses, family and the co-workers of fallen officers.

Dave is a Navy Veteran and has dedicated much of his music to patriotic themes that support military and first responders. His song “Last Call” has become an anthem for the families of fallen officers. He was inspired to write the song after hearing an officer’s actual last call and his final words back to his family and colleagues. Dave shares that “getting through the song” when he is performing in front of a group of law enforcement families is one of the hardest things he has ever done.

Much of our social structure depends on the assumption that the majority of the population maintains a respect for law and order and the “thin blue line” that preserves that stability. Sherry and Dave share their thoughts on the challenges faced by today’s law enforcement community and what the rest of us can do to support them year round – not just during National Police Week.

TAKEAWAY:  Both Sherry and Dave believe that there is currently a “War on Cops” and our communities must take dramatic steps to correct the situation.