The Right Reverend Derek Jones is the Bishop of the Armed Forces and Chaplaincy for the Anglican Church of North America. 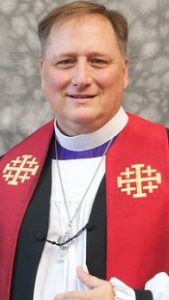 As Bishop of the Armed Forces it is Derek’s responsibility to train, educate and credential the Anglican Chaplains serving in the US Armed Forces, Veteran’s Administration, Department of Justice and other Federal and State agencies.

Prior to becoming a Bishop he was an Air Force Top Gun pilot and saw combat in both F-111 and F-16 aircraft. The F-111 Aardvark was the first variable sweep wing fighter aircraft developed.  It did not really fulfill Defense Secretary McNamara’s dream of a next generation fighter but did morph into an exceptional ground strike and electronic warfare aircraft. The original plan was for both the Air Force and Navy to fly the aircraft but the Navy wanted their own plane which led to the production of the F-14 Tomcat. Derek and I have some fun distinguishing the Air Force “Top Guns” from Navy “Top Guns”.

Chaplains were established by Congress as part of our Continental Army in 1775. The Department of Defense defines their purpose “to accommodate religious needs, to provide religious and pastoral care, and to advise commanders on the complexities of religion with regard to its personnel and mission, as appropriate.” We spend some time discussing Derek’s transition from a fighter pilot to ordained clergy.

The Department of Defense recognizes approximately 221 faith affiliations. As such, Chaplains must be a diverse group. However, most hold post baccalaureate degrees and must meet the physical standards and other requirement to be a commissioned officer.  Derek emphasizes that there are even Chaplains embedded with Special Forces.  “Every Chaplain has two bosses; their military boss and their ecclesiastical boss. Either one can terminate that Chaplain’s employment.”

Derek and I discuss the importance of “Religious Situational Awareness” particularly given the nature of our current conflicts.

TAKEAWAY:  “The spiritual fitness of an airman, soldier, sailor or marine is as important as their physical fitness when they prepare to engage in combat.”