Never Forget. Tim Brown was no stranger to the damage wrought by terrorist attacks.  As a member of the 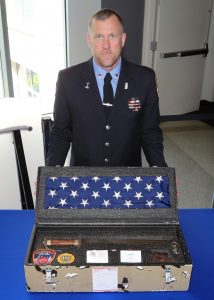 New York City Fire Department, he responded to the 1993 World Trade Center bombing. He was part of a specialized Urban Search and Rescue task force dispatched to Oklahoma City in 1995 following the Murrah Federal Building bombing.

But perhaps nothing could have prepared him for the abject horror of what was September 11, 1001.  Ninety three of his firefighter comrades were murdered that day, including two of his best friends.  Tim Brown survived the 9/11 attacks but not without scars. To this day he works to assure that the rest of us never forget.

Tim’s story is one of those featured in the award winning documentary “Rebirth”. The film tracks the healing process of four individuals who lost loved ones in the attacks.

Tim shares the milestones that have passed since 2001; we dug for our dead and gave them and their families proper honors, we built a museum worthy of their memories and meted out justice to most of those responsible.  Some milestones remain including the final prosecution of planners currently incarcerated and taking care of those who continue to die from “9-11 Illness”.

The healing process has been a long one for Tim and others.  But he may never again be completely whole and he certainly will never forget. “There are things that I can never un-see”.

Tim shares his personal voyage of recovery from the grief and loss of that day and how many have found love, hope and happiness again in their lives. Tim never imagined it would be possible to find other men that he respected and loved in his life once again but he has done so through his association with the other first sheepdogs and warriors of the Eagle Rise Speakers Bureau.

Just as in the case of Pearl Harbor, Tim says it is “absolutely critical” that younger generations hear the stories of September 11th and never forget.

TAKEAWAY:  Tim advises patience in grief. “Just be patient. Just be patient because these new wonderful things are gonna come into your life and it’s so worth hanging on and sticking around to wait and see the beauty that God has in store for us.