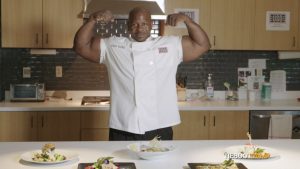 Chef Rush is unaccustomed to fame, but it couldn’t have happened to a nicer guy.

A single tweeted photo made Army Veteran Andre Rush an internet sensation.  His nickname is “Tiny” is a bit ironic considering Chef Rush is 285 pounds of solid muscle with 24” biceps.  Once considered the “strongest Chef in the Army”, he is using his fame to share powerful messages about supporting Veterans and each other.

Growing up in a large family, he developed a love for cooking at an early age, enjoying the challenge and science of it all.  He took his culinary passion with him to the Army, gaining certification as a 3-Star military chef and eventually cooking for several US Presidents in the White House kitchen.

Chef Rush feels strongly about addressing the scourge of Veteran suicide and has enlisted in support of Mission 22.  This issue touched him directly when a fellow soldier that he was mentoring took his own life.  Each day he does 2,222 pushups – not just to honor Veterans but also for the homeless, children who have been bullied and others who cannot stand up for themselves.

While struggling with his own issues, Chef Rush found that cooking was his therapy. He often volunteers to cook at the local USO and recently did a fundraiser for the homeless. He shares the story of a Special Forces Veteran who once thanked him, acknowledging the fact that if a man who can bench press 700 pounds can admit when he needs help, then anyone can.

I think the world will be hearing more from Chef Rush, the gentle giant.

TAKEAWAY: “It’s not about me; it’s about everyone supporting each other. Do what you need to do. Physical health, mental health all go together but once in a while just hug a neighbor, hug a friend, inspire a kid and…keep cooking!”