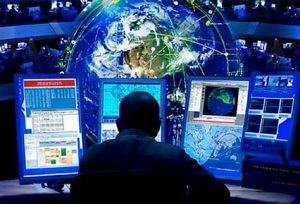 What is cyber war? How does one defend against it? What are the challenges in fighting a weapon of war that is constantly changing and becoming more sophisticated?

Tom Jones was a one star General and F-16 pilot when he was assigned to the Central Security Service (the military component of the National Security Agency). He rapidly gained an appreciation for the threat of cyber war. He was involved is creating the structure of what would eventually become US Cyber Command.

Cyber war doesn’t just involve battles in the digital realm. Real world forces are intricately tied to cyberspace with commands, supply and even weapon command passing through cyberspace.  The potential for escalation in cyber war presents a real concern.

Potential adversaries in cyber war include many of the foreign states one would normally guess. But the nature of this inexpensive weapon also opens the potential threat to non-state actor, terrorists and other rogue groups.   The battle space itself is fraught with ethical and legal issues in addition to military issues.

The roles in cyber war are often reversed. Rather than playing a supporting role to the military, the private sector is on the front lines of this battle.

Lt. General Jones says the constantly changing nature of this battle space makes it difficult to even foretell what cyber war will look like even a decade down the road.  It is quite possible that artificial intelligence will comprise most of the warriors battling in cyber space.

TAKEAWAY:  “I had quite a few sleepless nights after leaving the NSA. A cyber 9/11 is my biggest fear.”