Jason Redman tried to join the Army, but the Navy got him instead. Good thing because he became a member of one of our nation’s most elite special forces – a SEAL. 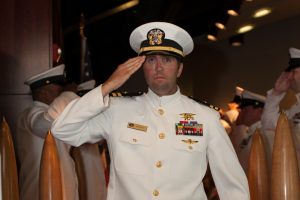 Accepted into the Seaman to Admiral Program, Redman was in his first semester of college when the 9/11 attacks occurred and he wanted to drop out to rejoin his team. However, one of the most respected officers in the SEAL teams uttered some prophetic words; “This war will not end quickly and we will need good operators and good leaders to fight this war. You need to finish your education and come back and lead.”

Leadership did not come easily to Redman and he made some mistakes – one that almost cost him his Navy career. Recovering from that experience taught him several lessons; owning your mistakes, humility and the true meaning of team action.

Redman redeemed himself and at the end of his second deployment, his team ran into an ambush. He was hit 8 times. He survived but the road to recovery included 37 surgeries.  During this time, he became weary of visitors’ pity so he wrote some words on a bright orange piece of paper and taped them to his hospital room door. Those words got him an invitation to the White House and now hang in a frame at the Walter Reed National Military Medical Center.  Jason says those words don’t belong to him – they belong to ALL wounded warriors.

There is courage in combat and courage after combat.  Back home, Redman did not mind that people asked him about his mangled face, but he became frustrated that no one seemed to consider that they might be battle wounds. This led him to establish the Wounded Wear initiative and the Combat Wounded Coalition.  His latest endeavor, the “Overcome Academy” will debut Feb. 19.  All of these programs help both Veterans and the public to realize that wounded warriors are not broken or damaged goods.

We also get a surprise call from Redman’s friend and former ATF undercover agent Jay Dobyns.

TAKEAWAY:  “The mark of any man or organization is not found in their past, but how they overcome adversity and build their future. And regardless of the overwhelming odds or opposition in your path, you always have the opportunity to overcome. It is YOUR attitude that will affect the outcome. Quitting is never an option.”