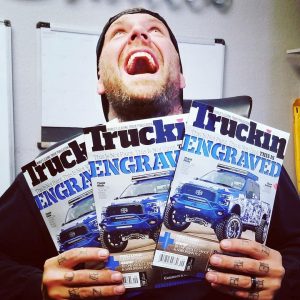 Freedom Blues is Hank Robinson’s monument of honor to his fellow warfighters and Veterans. He is our first featured Veteran Entrepreneur story for 2018.

Hank is a Veteran of three deployments himself; Kosovo, Iraq and Afghanistan. He joined right after the 9/11 attacks. During his 9/12 Army career he earned a Bronze Star with Valor and an Army Commendation Medal with Valor.

But when he separated, he found himself unable to find work, getting into alcohol and “other bad stuff”.  Always fascinated with metal work, he used his GI Bill to take a welding class and an artist was born.  In his words, he “..traded his M4 for a Dremel.”  Now his custom engraving work is in demand from professional athletes, music stars, movie producers and quite a few “normal folk.” 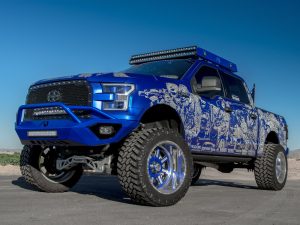 He founded Hanros Studios in his garage in 2011 but customer demand and the size of his canvas forced and expansion.  Inspired by tattoo artistry, he engraves everything from small pieces to trucks.  Each one a custom one of a kind piece engraved freehand. Oh, and those trucks!

His latest work Freedom Blues is a customized Ford F-150 lovingly engraved with images of real battle scenes. In all, the engraving work required over 800 hours. It was displayed at the Specialty Equipment Marketing Association in 2016 and was on display at the world famous Barrett Jackson Auction in Scottsdale this past weekend.  The truck features over $100,000 in aftermarket customization.

Hank hopes to sell Freedom Blues to raise money for the Boulder Crest Retreat, only one of the charitable projects he supports as a way of taking care of his fellow warfighters.

TAKEAWAY:  Hank’s “breakthrough” moment as an entrepreneur came when Dremel approached him about becoming a sponsor. He advises other entrepreneurs to find something they love to do regardless of the pay.