Both are representatives of the Folds of Honor foundation and both have made sacrifices for the freedom we celebrate this weekend.  One lost a leg and the other lost her husband. 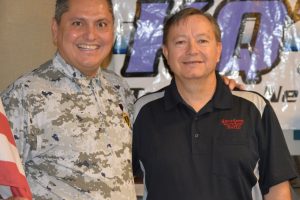 Major Ed Pulido is the Folds of Honor Senior Vice President.  He is a 19 year Army Veteran and on August 17th 2004 hit an IED in Iraq. Ed made a vow to the young man who saved his life that if he got back home and received a second chance, he would take care of people like that soldier and his family. He fulfills that vow through his work with Folds of Honor.

Following a forced amputation of his left leg, Ed went through some dark times. Receiving the letter informing him that he was “..unfit for duty” was a particularly tough pill to swallow. Ed invests much of his time addressing the scourge of Veteran suicides. 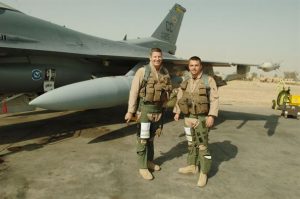 Ginger Gilbert Ravella knows all too well that Freedom isn’t Free. She became a Gold Star wife on November 27, 2006.  Air Force Major Troy Gilbert lost his life while providing close air support for the crew of a downed Special Forces helicopter.  The Commander of that Army unit told Ginger that he has no doubt that Major Gilbert saved 22 lives that day.

Now widowed with five young children, Ginger faced extra challenges due to the fact that Al Qaeda fighters removed Troy’s remains before a rescue party could reach the crash site.  It took 10 years of persistent pressure before his remains could be fully repatriated.

Ginger & Troy’s children were some of the first to receive scholarships through the Folds of Honor Foundation.  She continues to “pay it forward” by helping to spread the word about Folds of Honor as the Director of their speakers bureau.

Ginger and her current husband Jim (also a retired Air Force fighter pilot) have recently published a book titled “Hope Found” that discusses their journey through dual tragedies (Jim lost his wife to cancer in 2007) and how faith has buoyed them.