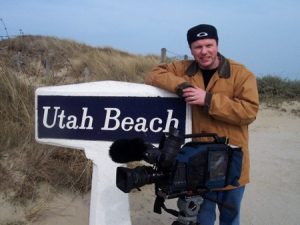 Tim Gray is the Founder and Chairman of the World War II Foundation. He has produced 18 World War II documentary films to date, with several more in post-production.  Tim is a master storyteller; just the kind of person we love on American Warrior Radio!

Tim was a sports and news anchor before taking a leap of faith and retiring to create the World War II Foundation. He was soon rewarded when his first documentary film won an Emmy. He is used to deadlines but faces his biggest challenge yet; chronicling the stories of the World War II generation before they have all passed on.

His latest work is “D-Day Over Normandy” which uses modern drone technology to give viewers a bird’s eye view of these critical battlefields complimented with interviews of men who were there and participated in the combat.

“D-Day Over Normandy” is narrated by NFL legend Bill Belichik. Belichik is just one of the notable names who have narrated Tim’s films. Others include; Tom Selleck, Matthew Broderick, Dan Akroyd, President George W. Bush,  David Schwimmer, Ben Affleck and Governor Tom Ridge. Actor Damion Lewis (who played Major Dick Winters in Band of Brothers) said it was a defining moment in his life.

While fun to partner with celebrities, Tim says he gets a bigger thrill meeting his World War II heroes. One common trait among them all is an earnest sense of humility – they had a job to do and did it.  He pursues his mission to educate future generations through the films of the World War II Foundation with a similar earnest passion.

The World War II Foundation is a non-profit and anyone who wishes to donate my do so directly at their website.