The Early Days of the Drone – Col. John Dale

The Early Days of the Drone – Col. John Dale 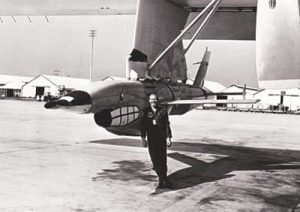 Colonel John Dale had an adventurous 32 year Air Force career including involvement in the very first drone programs. Many of the programs with which he was involved were just recently declassified.

John graduated high school during the Korean War and wanted to fly but hadn’t earned a college degree so he joined the Aviation Cadets program. He earned his wings in 1954 and was hoping to become a “hot shot jet pilot” but the end of the Korean War meant he would be assigned to C-119 troop carriers, which he considered a “real let down”.

However, he was soon recruited for the Project Genetrix reconnaissance program which launched high altitude camera carrying balloons that would drift over Eastern Europe, China and the Soviet Union. John and his fellow crew members would recover the balloons over the Pacific Ocean in specially designed C-119’s.  “You could actually say I was in balloon reconnaissance, I’m pretty old.”

Next, he began flying the then new C-130 and even flew with the “Four Horsemen” – the world’s only four engine aircraft demonstration team.

John was testing and developing the Parachute Low Altitude Delivery systems out of Japan during the early stages of Vietnam when his commanding General told him he would be sent to Tucson to fly DC-130’s – he had never heard of the place OR the aircraft!

The “Buffalo Hunter” mission involved “Firebee” and “Lightning Bug” drones that flew over North Vietnam, Cambodia, China & North Korea.  These drones proved a particular frustration for the enemy, particularly when drones were simultaneously launched from both sides of the country at once. John recalls one mission when 19 MIGs were chasing one drone! He also credits the drones for five kills, as MIGs chasing drones were often hit by their own anti-aircraft fire or ran out of fuel.

He hadn’t ever flown the U-2 but learned when he was assigned command of the squadron. When he first took over the squadron, there were only 11 U-2 pilots in the Air Force.

Only 1 of 25 volunteers qualified for the U-2. “When they graduated we had a big party with lots to drink. We wanted to make sure they were the kind of people that wouldn’t shoot off their mouth when drunk.”