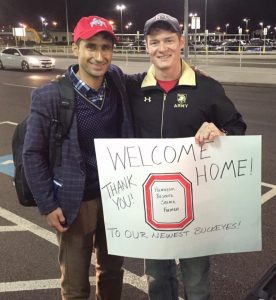 Thousands of Afghan interpreters served with the US Military.  They were promised safe conduct to the US. However, the process has not met the promises. Thousands find themselves stuck in bureaucratic red tape, often waiting years. While waiting, they are being hunted by our enemies.

Hamayon learned English in high school and also spent six months in the US at the Defense Language Institute. Despite returning to a comfortable job in Afghanistan, when he learned the US was looking for interpreters he volunteered. “When I came to America, the people in America treated me very well so I had it in my mind that if Americans ever needed help, I would not hesitate.”  He worked with 13 different military units, including Major Mike Kelvington’s Rangers.

On his first mission, Hamayon’ s convoy hit an IED. Even though there were no casualties, his fellow interpreter quit immediately. Ironically, Hamayon felt safer on Ranger missions than he did at home. “Working with Americans is ALWAYS dangerous in Afghanistan – a lot of bad people are looking for you. When I returned home on leave, I would spend the entire time in hiding. It was like I was in a cage.”

In August of 2014, Hamayon was the last Afghan interpreter released from duty with his Army unit. He had to change his home every 3 – 4 months. Jihadists put a “hit” out on him. One of his friends was beheaded the same night he received his VISA.

Major Mike Kelvington, a highly decorated Army Ranger made it his mission to help bring his Afghan interpreter Hamayon safely to the US.  Mike enlisted the help of No One Left Behind, The Havok Journal, fellow soldiers and wrote/called over 53 Congressional offices across 17 states.  After three long years Hamayon and his family safely arrived in the US.

TAKEAWAY: It took Hamayon four years to receive his VISA even with all the help he received.  He asks us to consider the difficulties experienced by those still left behind and work to fulfill our promise to all the Afghan interpreters who bravely served.