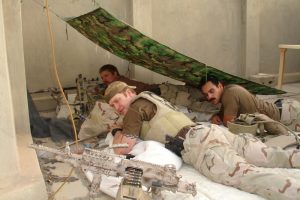 The Last Punisher is a book by Kevin Lacz that records his time as a member of SEAL Team 3, also known as “The Punishers”.  This no-holds barred account of the Battle of Ramadi has become a New York Times best seller.

One of Kevin’s close friends lost his father in the World Trade Center bombings and those 9/11 attacks inspired Kevin to join the military. He was initially interested in the Marines, but the recruiter was on a lunch break so Kevin went into the Navy office.

Although all he knew about the Navy SEALs came from the Demi Moore and Charlie Sheen movies, he saw a SEAL poster in the recruiter’s office and he was hooked.  Kevin became a SEAL sniper & combat medic.

Much of The Last Punisher chronicles his involvement in the Battle of Ramadi.  SEAL Team 3 included “Bottle Breacher” founder Eli Crane and Chris Kyle, whose story was told in the Clint Eastwood film “American Sniper”.  Kevin worked with Kyle and screenwriter Jason Hall on the film’s script. This led to Kevin serving as a technical advisor on the film and training Bradley Cooper to shoot. Cooper suggested Kevin audition to play himself in the film and, after submitting an I-Phone audition, Clint Eastwood said “Boy’s damn good – get him a job.”

The Last Punisher also exposes some of the never heard details of being a SEAL sniper such as the restrictive rules of engagement, the “paperwork” of a kill and the importance of every team member playing their role.

As a medic, losing team members in combat is difficult. Kevin shares that it is also VERY difficult when comrades are killed outside of combat as in the case of Chris Kyle and Ryan Job.

Takeaway: Kevin believes that elite warriors are born, not made. Training brings out the innate ability to be able to commit violent acts against our enemies.