SACRIFICE A MINUTE FOR THOSE WHO SACRIFICED THEIR LIVES

Home/Blog, Uncategorized/SACRIFICE A MINUTE FOR THOSE WHO SACRIFICED THEIR LIVES
Previous Next

SACRIFICE A MINUTE FOR THOSE WHO SACRIFICED THEIR LIVES 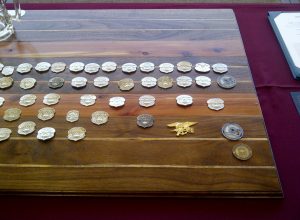 I still wince when I see Memorial Day advertisements for children’s toys, cosmetics, or mattresses.  Admittedly, not as much as when I hear someone wish “Happy Memorial Day” to a Veteran.

Despite repeated efforts with multiple dictionaries, I could not find the words “barbecue”, “vacation” or “sale” in any definition of the word memorial. However, the word “memory” was often repeated. It’s time that we remember the purpose of this holiday – to memorialize those who DIED serving our nation.

Over 120 broadcasts into the revival of American Warrior Radio, Memorial Day remains the most difficult show for me. Not for the most obvious reason; the dead don’t speak. They certainly don’t conduct radio interviews.  It falls upon the living to speak on their behalf.

Less than one percent of our population serves in the military. Most of our citizens have no personal, visceral experience with the consequences of war. I am part of that fortunate and thankful group. War is a messy, dangerous business. People die. Strike that – people are killed. Death is not confined to the battlefield, it comes even in the preparations to fight. Sailors on our own USS Tucson have shared with me that it is not the threat of an enemy weapon they fear the most. It is a fire several hundred feet below the surface, or a ruptured high pressure hydraulic hose that can cut a hole right through a man.

I recently passed that point in life where one finds themselves attending far more funerals than weddings. One such event took place in a large hangar at Davis-Monthan Air Force base. It is a huge space often vacant. On that day it was full of living souls gathered to memorialize one of their own; Chief Master Sergeant Nicholas McCaskill, a pararescueman killed in Afghanistan. Along with a few dozen other civilians I sat in awe as his comrades filed to the front of the hangar. In pairs, they paid their last respects in silence, punctuated only by the staccato slap of fists driving their crest into Nick’s memorial board and the muffled rustle of fabric as they rendered a last salute. An hour later, the wood surface was covered in brass including a Navy SEAL Trident and several Tucson Fire Department crests.

I have spent my adult life supporting those who serve. I thought I understood. On THAT day, it was as if each of those firm fists pounding crests were simultaneously slapping me across the face. With the ferocity of a Sonoran thunderstorm, the high price paid by so few for so many became abundantly clear.

It would befit the 99.5 % to remember that every soldier, sailor, marine and airman who raised their hand after 1973 to swear an oath to defend our constitution, sacrificing their own life if need be, has voluntarily done so. Today, military families pray for the safe return of a loved one. Some will find their prayers unanswered.

I recently interviewed an Army Ranger medic who chose to sell his business and give away most his earthly possessions to spend his life wandering the world. His rationale is that he would live his life to the fullest as his way of honoring those comrades whose life was cut short far too early.

I am not suggesting all of us should make such a sacrifice, but there are 525,600 minutes in the average year. The least we can do is sacrifice one minute on Memorial Day to pause and remember those who sacrificed the rest of their lives.