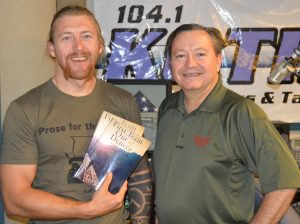 Assimilation back into the civilian world proved a challenge for Ranger Medic Leo Jenkins. After submitting over 160 applications with only one call back, Leo says he officially became a “disgruntled Veteran”. He fell into a deep fissure. The frustration of transition is best exemplified by the college that insisted he take a basic first aid course because his Ranger Medic qualifications “..didn’t count because he did it in the military.”

A call from fellow Ranger Marty Skovlund led Leo to an epic adventure. The challenge was to see how far they could travel on only $100 and raise funds for The Gallant Few . Their nomadic voyage would become the subject of an award winning documentary and his book “First Train Out of Denver.” They ended up logging 8,000 miles and raising $25,000.

The trip also gave Leo a lot of time for introspection and meeting/communicating with other Veterans about their challenges with assimilation. To this day he tries to live in a way that fulfills the promise he made to a friend killed in Iraq and all the others that never came home; Leo would do everything in his power to live a happy and full life.

TAKEAWAY: “The only thing we should ever fight wars for is peace.  If we really took the chains off and showed everyone how ugly war is, we would probably fight fewer of them.”