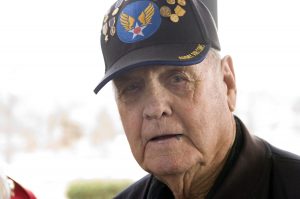 A special broadcast on the 73rd Anniversary of the attack on Pearl Harbor.

Durward Swanson was an 20 year old Army Air Corps Security Policeman at Hickam Air Force base at Pearl Harbor on December 7, 1941. He had just returned to his bunk from the chow hall when the attack began. A bomb dropped by the first wave of Japanese attackers struck that chow hall and killed 43 personnel.  Gathering  his security team, he found one of his patrolmen was out on a baseball field firing a BAR at the enemy airplanes.

Swanson’s security forces had raised a US flag outside the Hickam Barracks that morning. Following the day’s combat, he and a fellow soldier retrieved that flag at 9 o’clock that evening. The bullet riddled flag is still on display at the Hickam Barracks.

Swanson also flew as a crew member on a B-17 bomber that was shot down during the Battle of Midway. Seven of his fellow crew members died that day and three survived including the severely injured Swanson. Bleeding profusely in the Pacific Ocean, at that time he became more concerned about sharks than the enemy. Luckily he and his fellow survivors were picked up by a rescue boat within ten minutes. He was awarded the Distinguished Flying Medal and a Bronze Star for his actions during World War II.

TAKEAWAY: “People have labeled me a hero because of the attacks and Midway battle. But I don’t consider myself a hero. I consider myself a protector of America like every Soldier, Sailor, Airman, Marine and Coast Guardsman serving today.”