I Was There on September 11

Home/Podcast/I Was There on September 11
Previous Next

I Was There on September 11 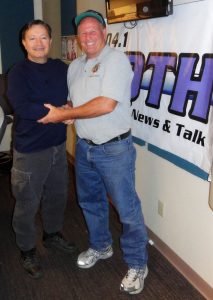 Dan Rowan was serving with New York Fire Department Engine Company 33 on September 11. His Engine Company lost 10 firefighters on that day but Dan says he actually lost 343 brothers in the attacks. Of the total firefighters killed, Dan had personally trained or worked with 53 of them.

This is one of the most compelling interviews I have done. As you can hear in his voice, September 11th is still a very sensitive issue for Dan.

The south tower had already come down and the north tower collapsed right when his engine company arrived.

“I made it into a twilight zone movie where, when the building came down on us, everything got knocked out. All the engines that were in full operation with the lights going..all you had was dust and debris but no sound but the clicking of the MARS lights going click, click, click.”

In addition to describing the chaos and heat of September 11 itself, Dan also introduces us to some of the men who lost their lives that day. The remains of some of his fallen team members were not recovered until several weeks later.

Dan also describes how the rescue personnel pushed on despite not having the proper equipment and the illnesses that continue to affect responders who worked on September 11 and afterward.

“It’s going to take a long time before things get better..hopefully they won’t get any worse.”
Dan has served as both a policeman and fireman. He first signed on to the New York police department but was also recruited by the fire department.  He has also worked for the Los Angeles Police Department and currently serves with the Marana Police Department.