D-Day was the greatest amphibious invasion in the history of warfare and one that that Harper Coleman will never forget. A member of the 4th Infantry Division, he landed in the first wave at Utah beach carrying a 30 pound machine gun over his head. Harper just celebrated his 100th birthday and joins us to share his memories of D-Day and the other major battles he was part of as his unit moved across Europe. 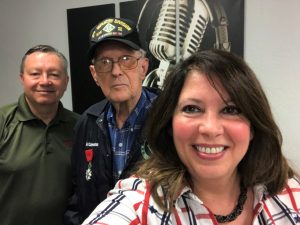 Suzanne Ryan is an avid historian. She regularly takes Veterans and their families back for tours of the Normandy landing areas. This past August Suzanne took Harper back to Utah Beach for the first time since the war.

French armor divisions were assigned to take the lead in liberating Paris but the 4th was attached. Harper recalls that the French troops may have begun celebrating a bit early and US soldiers were tasked with clearing the remaining Nazi forces.

His unit fought in both the Battle of Hurtgen Forest and the Battle of the Bulge. Hurtgen was the longest battle fought on German soil during the war and our troops’ first introduction to German artillery “tree bursts”. Fragments of a tree wounded Harper in the arm and put him out of commission for a couple of weeks. Harper was brought out of the Battle of the Bulge with frozen feet and narrowly avoided amputation.

Harper and Suzanne share the amazingly warm welcome they received from French citizens during his return visit. The Mayor of Saint Marie de Mont made Harper an honorary citizen. Suzanne booked what was supposed to be a private boat tour of the beaches for Harper but when word got out that there would be a WWII Veteran aboard, the boat was packed with French citizens who wanted to ride along. She also shares an encounter with a “big burly tattooed guy” who, upon seeing Harper wearing the French Legion of Honor medal, snapped to attention and rendered Harper a salute – tears streaming down his face.