One might say that military service is in Col. Joseph Turnham’s DNA. His family traces their military service back to his sixth great grandfather who fought at Valley Forge and was present at Yorktown for the surrender of Cornwallis.  Turnham HAD planned to become a doctor until he took some flying lessons. He now has over 3,600 hours in the cockpit – 1,149 of those in combat. 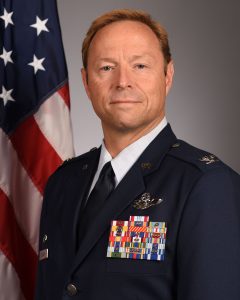 Prior to assuming command of Davis-Monthan Air Force Base (one of the largest installations and flying operations in the US Air Force) Col. Turnham was commander of the NATO mission to train & advise the Afghan Air Forces.  He emphasizes that 13 different nations were engaged in the effort. While people may not think of Afghanistan when it comes to Air Forces, Turnham unequivocally states that their pilots are extremely disciplined and professional.  A Pentagon report highlighted the fact that the Afghan Air Forces and Special Forces are the two units that have made the greatest strides.

We also spend some time talking about how the need to train and deploy airmen around the world has not slowed down during COVID.  In some cases Davis-Monthan has had to deploy forces in just a couple of days. Turnham says that while COVID has changed the way they do businesses, effectiveness remains high. “There have been wars in times of pandemic before”.

He also shares some of the things his team is doing to shore up resiliency among their personnel during the pandemic.  He and his Command Chief have begun regular “walkabouts” where they randomly drive the base and check in on the airmen.

TAKEAWAY: “We are social creatures, so if we become disconnected we need to make sure people retain those connections. We are taking care of them so they can take care of the mission.”