Koh Tang Island may have been Alex Wright’s ONLY combat time in the cockpit, but it was sufficient to leave a lasting impression. Also known as the “Mayaguez Incident”, the battle was the last “official” action of the war in Indochina. The names of the personnel who lost their lives are engraved on the last panel of the Vietnam War Memorial. 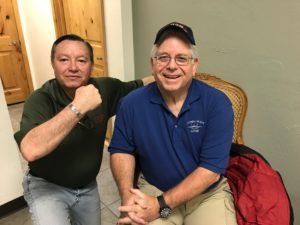 On May 12, 1975 Cambodian Khmer Rouge forces boarded the US merchant ship Mayaguez and took the crew hostage. The battle took place in the shadow of the recent departure of US forces from Saigon and the capture of the USS Pueblo by North Korean forces in 1968. What ensued was a perfect storm of political hubris and the fog of war.

Alex’s first mission came on May 14th when his squadron was ordered to interdict the Khmer Rouge patrol boats traveling from the Mayaguez toward the mainland.  His squadron sank several patrol boats.

A two pronged assault on both the Mayaguez and Koh Tang Island took place on May 15th. Arriving over Koh Tang, Alex saw several helicopters already burning on the beach. “My sole goal for the rest of the day was to help get the Marines off that island.”

As the on-scene Commander, Alex had to prioritize the resources available and assure they were properly directed.  In some cases the separation between the Marines and the enemy was as little as 100 feet. His 10 hours/20 minutes in the cockpit that day is the longest combat mission ever flown by an Air Force A-7D.

Alex is a member of “The Friday Pilots”, an informal group of retired pilots who meet weekly to share stories and comradery.

More information on Koh Tang/Mayaguez Veterans organization may be found at Kohtang.com

TAKEAWAY:  “This particular incident changed my mind about whether I would make the military a career. I resolved to move on to be the best fighter pilot I could be.”