The Oklahoma City bombing was a catalyst that drove Firefighter Chris Fields to finally deal with the demons accumulated after several decades of witnessing human suffering. 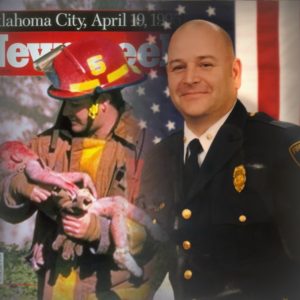 There are over 1.1 million firefighters in our nation, seventy percent of whom are members of volunteer departments. Every day they can face a roller coaster of emotions from a successful rescue to having to cut a deceased teen out of a vehicle right when the parents arrive on the accident scene.

Chris was a Captain with the Oklahoma City Fire Department on April 19th when a truck bomb was detonated beside the Alfred P. Murrah Federal Building.  168 persons were killed and another 680 injured. The terror and desperation of that day was captured in a photo of Chris holding the body of infant Baylee Almon.

“As I was looking down at Baylee I was thinking that somebody’s world is going to be totally turned upside down today. I didn’t know that scenario was going to played out 168 times that day.”

He struggled with guilt over being the last person to hold baby Baylee and for being singled out in the photo. “First responders – military, we are all a team effort.”

Chris was raised in the “suck it up” era. For years HE was the one getting people help but when others started telling HIM to get help he initially didn’t listen.  Refusing to deal with his issues started a deep spiral that led to leaving his family, depression and suicidal thoughts. After a “rock bottom dream” he reached out to his fire department Chaplain.

Chris’ advice to anyone who is dealing with a situation whether it is trauma, relationships or addiction is to not take the route of pride and ego – reach out and take the first step toward getting help.

TAKEAWAY: “I was surprised when I reached out how many people were reaching back.”