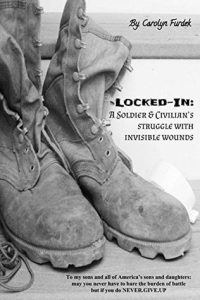 The first time Carolyn Furdek “locked in” was during a convoy mission no different than hundreds of others she had conducted before.  It was the beginning of a decade long struggle against an invisible enemy.

Carolyn competed at the collegiate level in swimming, graduated airborne school with honors and was one of the first West Point cadets to attend Naval Diving and Salvage training.  She was no stranger to stressful situations.  But for some reason, something was causing a confident and respected leader to suddenly retreat into her own mind.  These locked in episodes would last anywhere from a few days to four months.

Locked In; A Soldier and Civilians Struggle with Invisible Wounds documents the affliction that would lead to her early retirement from the Army and migration in and out of mental health wards during her search for answers. Her locked in episodes would last anywhere from a week to four months. They baffled both Carolyn and medical professionals.

Having your commander meet you at the gate and relieve you of your weapon is one of the most hurtful things that can happen to any soldier. But that was only the first of several traumatic transitions that Carolyn would have to make, including abandoning her dream of becoming an FBI agent.

Thankfully, the loving support of family, comrades and fellow employees kept her above water during these locked in episodes until diagnosis was finally made and a successful course of treatment undertaken.  Carolyn is now a doctor of physical therapy and regular advocate for others experiencing the challenges and stigma of mental health disorders.

TAKEAWAY: “Be willing and open to accept the help that people want to give you. It’s okay to ask questions, don’t just accept the medication that is being thrown at you. Everyone struggles with something but mental health issues can happen to anyone and it’s okay to talk about it.”