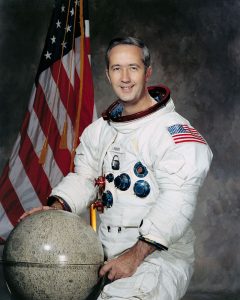 Astronaut Jim McDivitt’s path toward being the 20th man in space was a circuitous one..including 145 combat missions in Korea and a Colonel who called him a “traitor” for leaving the Air Force to go to NASA.

While flying in Korea, he completed his requisite 100 missions but extended his tour three times because they didn’t have many combat experienced pilots flying at the time. Returning from R&R leave he missed the normal courier plane and that aircraft crashed while taking off, killing several hundred persons.

He has logged more than 5,000 flight hours including flying the chase plane for Robert White’s historic X-15 flight in 1962.

Along the way he had a number of potentially “Career Ending Capers” (refusing President Johnson’s invitation to his ranch and suggesting the White House instead) and a few more serious situations like one that could have cost the lives of both men aboard Gemini 4. While his fellow astronaut Ed White made a historic first American space walk, the gears on the space capsule’s hatch became un-meshed making the door difficult to open and close. Luckily McDivitt was able to fix the problem, otherwise the likely would not have survived re-entry.

Another in our series of interviews with “The Friday Pilots” – a really fun chat with Brig. General (USAF Retired) Jim McDivitt.