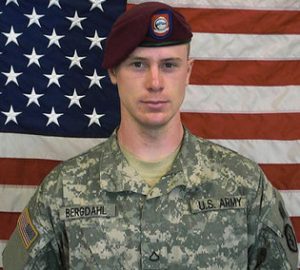 Bowe Bergdahl walked off his post in June of 2009 and was captured and held by the Taliban for five years. Since being returned in a controversial prisoner exchange, his case has become one of the most winding and controversial tests of military justice during the present wars. Now General Robert Abrams has ordered he face a courts-martial.

Bergdahl washed out of Coast Guard basic training before receiving a waiver that allowed him to join the Army.

An initial investigation recommended more lenient penalties. General Robert B. Abrams ordered that Bowe Bergdahl face a general Courts Martial on charges of desertion and misbehavior before the enemy. The case has been fraught with political undertones, including charges that personnel were killed or injured while searching for Bergdahl.  He could face a punishment of up to life in prison if convicted.

We discuss the courts-martial process in general and the specifics of the Bergdahl case with military intelligence analyst “Scott Faith” of the Havok Journal.